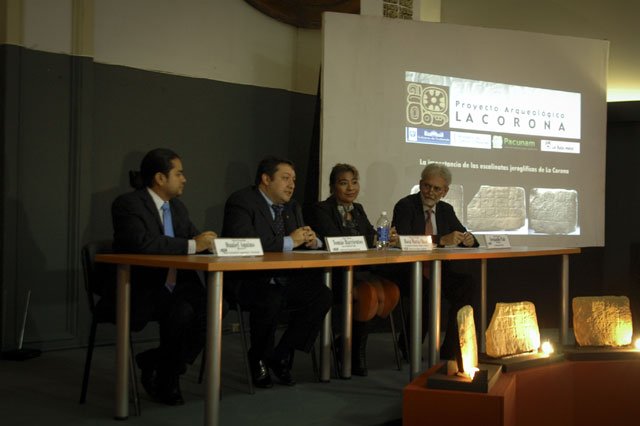 The Ministry of Culture and Sports, in collaboration with La Ruta Maya Foundation, concluded the process to return three limestone blocks with inscriptions to Guatemala. The three are part of one of the Hieroglyphic Staircases from La Corona Archaeological Site and refer to dates between 662 AD and 683 A.D.

Archaeologists Marcello Canuto (Tulane University) and Tomas Barrientos (Universidad del Valle de Guatemala), who directed excavations at the archaeological site of La Corona, commented: “The recovery of these blocks is a big step for the reconstruction of the hieroglyphic staircase discovered this year, as it was completely dismantled by looters”. It also sets a precedent to recover other blocks from this and other staircases that are now in museums and private collections outside Guatemala.

Most of the archaeological sites in Petén suffered systematic looting since the 1960s, causing the physical destruction of monuments and buildings, as well as the destruction of the history of ancient cities, the Maya region, and the country, while leaving the stolen objects without a context.

The three blocks repatriated in 2012 were were looted from La Corona and reached the hands of a collector in the United States. However, these monuments surfaced about five years ago, when the owner died and their photos circulated on the internet with the intention to sell. Thanks to the initiative of Dr. Marcello Canuto, then Director of the newly established Regional Archaeological Project of La Corona, information was collected on these three blocks, so they were quickly incorporated into the list of looted monuments from the site. It is important to highlight that since the inception of this archaeological project, one of the main objectives has been to locate, record, and study as many stolen panels as possible, with the hope of returning them to Guatemala. This work was carried out in close collaboration with American, European and Latin American epigraphers, who are also on alert for these sculptures in private collections.

In the case of these blocks from La Corona, Dr. Canuto quickly reported their existence to the Guatemalan authorities. Furthermore, it was established that these sculptures were part of a hieroglyphic staircase, of which four other blocks were known. All were identified by their writing, with glyphs arranged in three rows and four columns. All three blocks provide relevant historical information which -combined with the rest of the blocks of this staircase- are an invaluable text not only for the history of La Corona, but about its relationship with Calakmul and the Kan Kingdom. Also, the texts are a source of information about the religion of the time, since they specify the rituals performed by the rulers and nobility of La Corona. Unlike other texts of the Classic period, ritual is the main theme as well as other events that provide details on family ties and relationships among the members of the Royal Court if La Corona and its allies. Therefore, this staircase does not mention any war event or prisoners.

Finally, it was La Ruta Maya Foundation the one in charge to conduct the procedures for the return of the three blocks to Guatemala. Moreover, while carrying out the repatriation process, excavations at La Corona found another 14 blocks with glyphs arranged in the same format, thus indicating that this staircase was large and it was a significantly long text.

Thanks to the excavations of the Regional Archaeological Project of La Corona, and this action of the La Ruta Maya Foundation, 18 blocks out of the 22 already known, have been recovered. It has been estimated that the staircase could have a minimum of 30 blocks with historical records of great importance to understand the role of the Kan Kingdom in the Petén region. Although the rest of the blocks still need to be located, we can now have a partial reconstruction of the hieroglyphic text, which to date is the longest found in Guatemala dating from Pre-Columbian times.