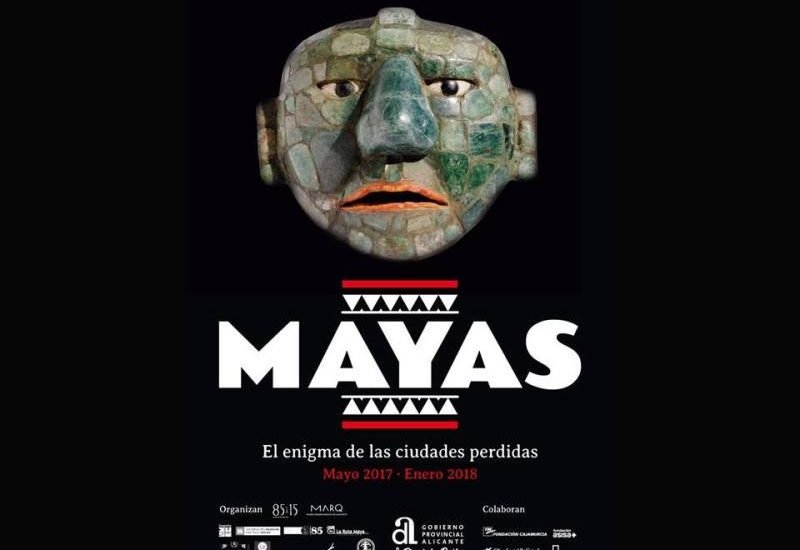 Spain welcomes the exhibition “Mayas. The Enigma of Lost Cities” at the Provincial Archaeological Museum of Alicante (MARQ).

This exhibition encompasses about 200 objects from the National Museum of Archeology and Ethnology of Guatemala, La Ruta Maya Foundation (Guatemala), the Neria Herrera Collection of the Juan Antonio Valdés Archaeological Museum (Uaxactún, Petén, Guatemala), the Berlin Ethnological Museum, and the Rautenstrauch Joest Museum of Cologne (Germany). Most of the Guatemalan works of art are presented for the first time in Europe, where this show has been seen already by almost half a million people in its previous venues in the Netherlands (Drents Museum in Assen) and Germany (Historical Museum of the Palatinate in Speyer). MARQ is the third European museum that houses this important exhibition that can be visited from May 25, 2017 until January 7, 2018.

“Mayas” is a project that emerged within the EEN (European Exhibition Network), a technical platform that allows the exchange of information and the creation of exhibitions. Under the curatorship of Dr. Nikolai Grube (Bonn University) and the coordination of Lars Boerner (Historisches Museum der Pfalz in Speyer), this exhibition brings to the general public the Mayan culture, which developed in what is now southern Mexico, Guatemala, Belize and part of Honduras and El Salvador. The exhibits tell about the myths, art, rituals, amazing constructions and complex Maya society, while reflecting the technology and the sciences that allowed the development of this great culture.

A large polychrome sculpture (almost 3 meters long) representing a character wearing a jaguar pelt mask and skirt, is one of the works of art that makes its debut on the European continent. The jaguar is the most important animal in the supernatural Mayan world, with a polyvalent symbolism given by its natural behaviour since he moves throughout the natural and supernatural realm when moving in the sky (climbs the trees), the natural world, and in the underworld (which entrance is thorugh caves or bodies of water, being the jaguar an excellent swimmer).

The exhibition emphasizes imposing stelae, slab-shaped monuments with hieroglyphic inscriptions, that were placed around plazas and narrate the history of great cities like Tikal, Palenque, Copán and Chichén Itzá. The rest of the exhibition objects include a striking mask made of jade mosaics; shell, gold and jade ornaments; and ceramics and utensils of other materials, such as stone and metal, which account for over 2000 years of Mayan culture.

The archaeological objects are distributed in three different galleries, each one recreated in a different way, immersing the visitor in the jungle with immense temples and palaces. One gallery has luminous pyramids, another emphasizes the “maya arch” or vaults in temples invaded by the jungle, and a third represents the “Maya underworld”. The galleries present the following themes:

The Maya Creation of the World

As if the visitor were an explorer, the first gallery surprises by the monumental architecture of the pyramids, represented with printed textiles and light, where the secrets of hieroglyphic writing is desciphered on stelae, lintels, altars or in precious ceramic vessels.

The Popol Vuh collects the myth of creation. When there was nothing but silence and emptiness, the gods, hidden in the deep ocean gathered one day and filled the land with mountains, valleys, rivers and lakes. Pronouncing their name, they created the animals that are the guardians of forests and mountains.

After the animals, the gods created the first human beings from maize. Since Mayan culture is complex, other stories are told in the exhibition, such as an economy based on agriculture and commerce. In the cornfields, or orchards near the houses, pumpkins, beans, and corn were grown, the latter a product so essential that it is evoked in its main deity, the Maize God. Water supply during the dry season was achieved with cisterns and canals. Cocoa reached a special value in its celebrations and also as a currency for exchange. Life was governed by the accuracy of its calendars, based on exceptional mathematical and astronomical knowledge.

Splendor and Collapse of the Mayan Culture

The vault or “maya arch” characterizes the interior of Mayan temples and palaces. This second great atmosphere is created by a series of vaults that divide galleries or smaller rooms with showcases in which the apogee of culture is approached highlighting the development of large cities like Tikal and Calakmul, their monumental palaces, the importance of a divinized king and his court of nobles, scribes, musicians and servants.

The rulers divided the territory rivaling in wealth and power, carrying out alliances and wars. Also, the representations of the gods and their rites demonstrate the importance of a symbolic world composed of numerous deities worshiped through rituals, including offerings, dances, and even blood sacrifices. Between 800 and 1000 AD this great culture suffered a decline with successive wars, changes in the use of territory, and climate changes (an increase of droughts) that led to the collapse of society as it was, with the gradual abandonment of the cities. The Mayan culture, however, continued in new forms. In the Postclassic, for example, cities such as Chichen Itza and Mayapan became important commercial centers.

Men and Women of Maize

The sky with the characteristic Maya blue and the volumes of its constructions, inspire the atmosphere of the third gallery. It is the turn to contemplate the great monuments made in stone and stucco: stelae, panels, and monumental sculptures, as well as approaching the deep beliefs of that culture from the understanding of the paintings of San Bartolo.

This gallery emphasizes the monumental sculpture of a man with attributes of jaguar, emulating the stalking stance of the feline, as well as the stelae of Ceibal and Dos Pilas, which shows the young Lord in full ritual regalia of blood sacrifice. The power is shown in the attributes that the ruler carries in the stelae of La Amelia and the ballplayer king of Machaquilá, while the Lacanhá lord personifies the Maize God, of enormous importance for the sovereignity in the Mayan social universe. These images contrast with that of a kneeling captive, bound and stripped of his status, about to be sacrificed, an example of “victory in battle” propaganda. The stela from Calakmul (Mexico) dated 731 AD, for example, describes the history of the dynasties that inhabited this disappeared city-state that had a great influence in other Mayan cities.

Finally, the MARQ stands out for its accessibility policy. Both the museum and the temporary exhibitions are accessible to all audiences with information in 3 languages (Spanish, Valencian and English) as well as for individuals with special needs. Therefore, it is easy to go through the displays with a wheelchair (available free of charge), labels are written in Braille system, guided tours are offered in sign-language for the hearing inpaired and finally there are replicas that allow a person with blindness to contemplate the art of the ancient Maya touching objects in different materials, sizes, and textures. 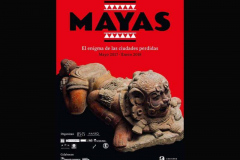 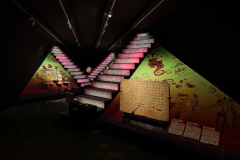 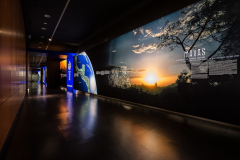 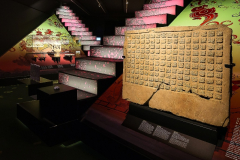 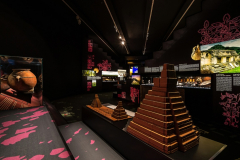 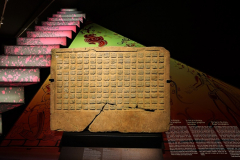 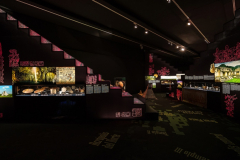 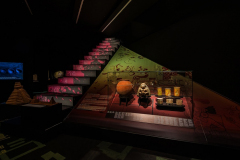 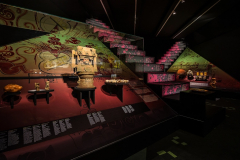 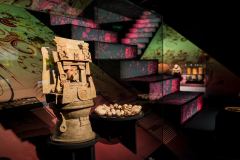 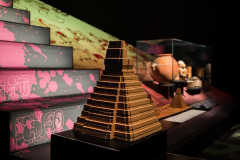 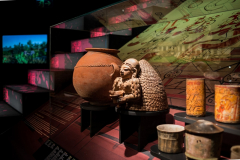 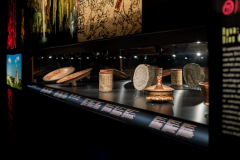 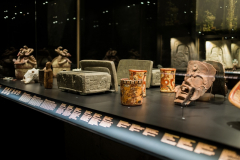 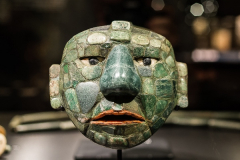 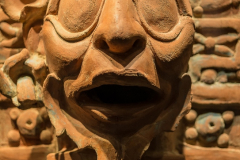 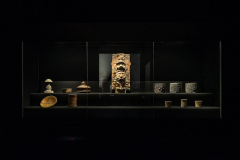 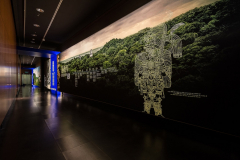 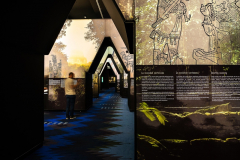 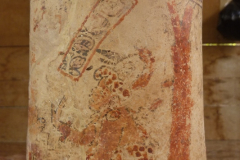 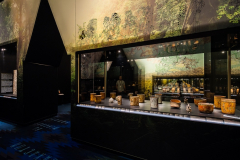 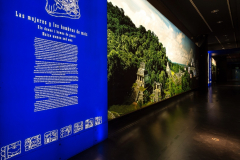 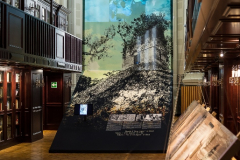 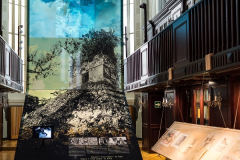