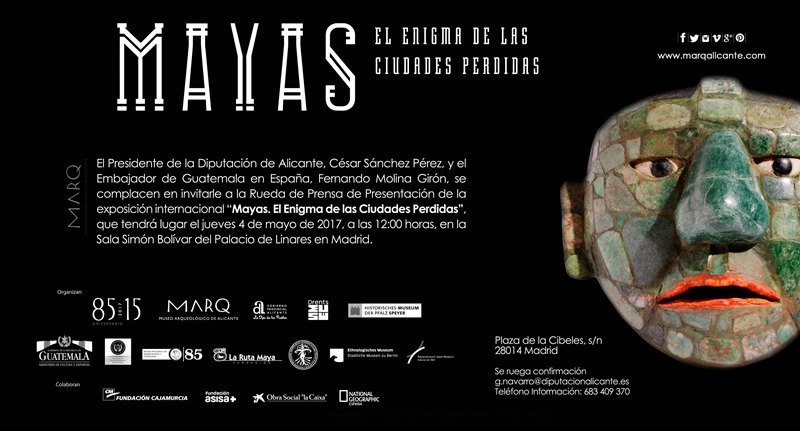 The exhibition “Mayas, The Enigma of Lost Cities“, brings together an important collection of objets from La Ruta Maya Foundation, the National Museum of Archaeology and Ethnology of Guatemala (MUNAE), and the Dr. Juan Antonio Valdés Museum / Collection Herrera, most of which have not been seen in Europe before. The exhibition will be inaugurated on May 25, 2017 at the Archaeological Museum of Alicante MARQ (www.marqalicante.com).

Along with them, and as a complement to this magnificent collection, some objects from prestigious European museums will be shown too, such as the Ethnological Museum in Berlin and the Rautenstrauch Joest Museum in Cologne. “Mayas” is a project implemented by the EEN (European Exhibition Network), a technical platform that allows the exchange of information and the creation of thematic exhibitions such as this one related to Mesoamerican archaeology. This exhibition was successfully presented at the Drents Museum in Assen (The Netherlands) and the Historisches Museum der Pfalz in Speyer (Germany).

The exhibition was presented to various media at a press conference which took place on May 4, 2017 at the Simón Bolívar Hall of the Linares Palace in Madrid (Casa de América). The meeting was attended by the President and members of the Diputación de Alicante, the Embassy of the Republic of Guatemala, the Directors of MARQ, archaeologists Dr. Nikolai Grube and Dr. Miguel Rivera Dorado, as well as the representatives of La Ruta Maya Foundation and MUNAE.

Video of press conference at the Simón Bolívar Hall of the Linares Palace in Madrid (Casa de América):