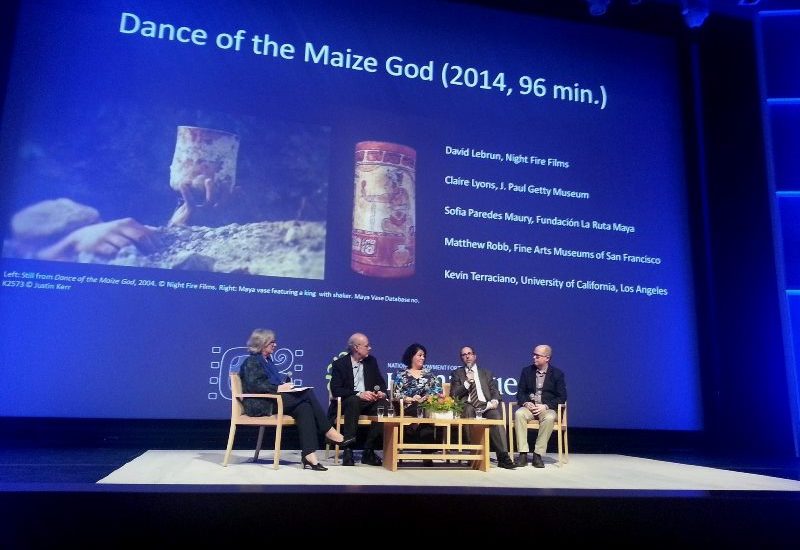 On February 1, 2015 the Getty Research Institute organized a screening of the documentary film “Dance with the Maize God” and a discussion with a select panel of experts in the field, including Sofia Paredes Maury, Executive Director of the Foundation. Three days before it had been presented, with great success and with a different group of panelists, at the Ethnographic Museum in Berlin.

Over the past fifty years, thousands of exquisitely painted Maya vases, most looted from tombs, have flooded into public and private collections. These extraordinary works of art opened a window on the Maya past, but the race to unearth these treasures has destroyed ancient temples.

The documentary film “Dance of the Maize God” (2014, 96 min.) enters the world of vases to explore ancient Maya life and mythology, as well as the tangled issues involved in the collection and study of looted art. The story is told by villagers, looters, archaeologists, dealers, art historians, and curators, for each of whom these vases hold a different value and meaning.

This time, the participants were the following:

This film screening and panel discussion are related to the Getty Research Institute 2014/2015 research theme, Object—Value—Canon, and were made possible in part by the National Endowment for the Humanities.

You can see the video of the panel discussion here: http://www.getty.edu/research/exhibitions_events/events/maize_god/index.html