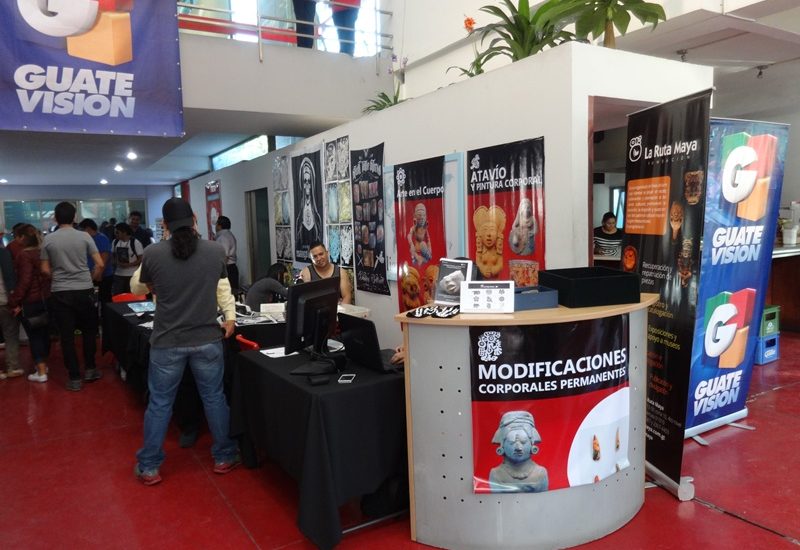 La Ruta Maya Foundation participated with a booth at the ExpoTattoo 2016, invited by the organizers of the Convention, announcing the exhibition “The Human Figure and Body Decoration in Pre-Columbian Times”, which openned to the public at the Training Center of the Spanish Cooperation in Antigua Guatemala from August 25, 2016 to February 26, 2017.

Images of archaeological objects with evidence of body decoration through painting, tattoos, scarification and piercing were shown in the colorful stand. The event began with a press conference organized by the Guatemalan Tourism Institute (INGUAT) in which La Ruta Maya had a relevant role with a short presentation under the theme “Prehispanic Body Decoration”, as part of the general theme of the Convention: “Art on the Skin”.

Among the special guests were Megan Massacre, of NY Ink (USA) and Cervena Fox, tattoo model (UK) who were in Guatemala during the 3 days. The rest of the event was held at the premises of  the French Alliance a in Guatemala City from October 19 to 21, 2016 and was attended mostly by tattoo studios, tattoo masters and the general public.

The Foundation’s stand received many visits, both  because of interest and curiosity, as it’s the first time that a cultural organization participates in an event like this. The goal: to reach all sectors with cultural heritage.