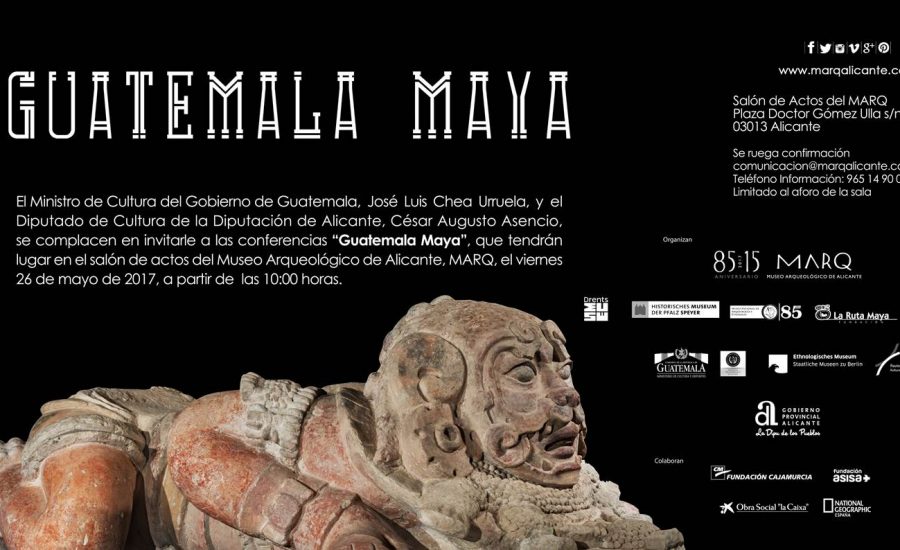 Invitation to the conference cycle as part of the opening of the exhibition “Mayas, the Enigma of the Lost Cities”.

* Conferences will take place at the Museum´s auditorium on Friday May 26, 2017 starting at 10:00 am. Lectures in Spanish.

The exhibition “Mayas, The Enigma of Lost Cities”, brings together an important collection of objets from La Ruta Maya Foundation, the National Museum of Archaeology and Ethnology of Guatemala (MUNAE), and the Dr. Juan Antonio Valdés Museum / Collection Herrera, most of which have not been seen in Europe before. The exhibition will be inaugurated on May 25, 2017 at the Archaeological Museum of Alicante MARQ (www.marqalicante.com).

To complement this extraordinary collection, other European institutions are participating too with important works of art, mainly the Ethnological Museum in Berlin and the Rautenstrauch Joest Museum in Cologne. “Mayas” is a project implemented by the EEN (European Exhibition Network), a technical platform that allows the exchange of information and the creation of thematic exhibitions such as this one related to Mesoamerican archaeology. This exhibition was very successful in its previous venues, the Drents Museum in Assen (The Netherlands) and the Historisches Museum der Pfalz in Speyer (Germany).