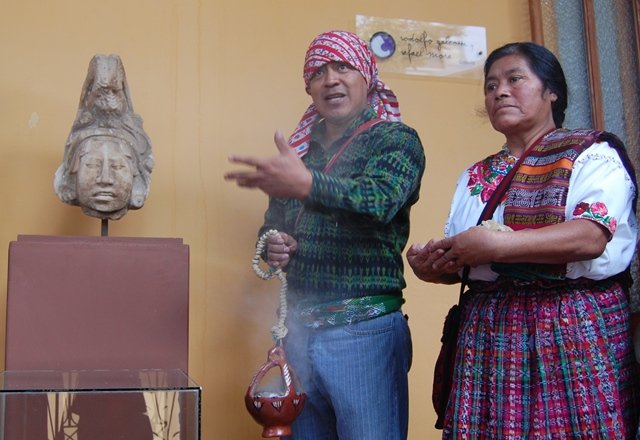 Once again, the collection in the custody of La Ruta Maya Foundation was consecrated in a solemn ceremony by a group of Aj’qijab or Mayan Spiritual Guides. The first time, the objects were consecrated by the authorities of the Indigenous Municipality of Santo Tomás Chuwilá, Chichicastenango, in order to “liberate the knowledge and protection” to the Pre-Columbian objects, according to the Mayan worldview.

Is this opportunity, a ceremony was performed by another group of spiritual guides or Ajq’ijab, led by Aj’qij Carlos Moran, in order to “wake up” the Pre-Columbian objects and “revive” them to fulfill their function prior to their display in the “WORLD OF THE MAYAN ARTIST” exhibition, in Quetzaltenango. For this purpose it was required to open the gass showcases to smoke them with the sacred copal pom, the natural resin used since Pre-Columbian times to facilitate the communication between objects and people with their ancestors. Given that ancient objects “like the smell of incense” -according to the Ajq’ijab explanations- it was necessary to “revive” them prior to their presentation to the public.

A special anecdote during the event was the fact that the officiant was wearing a precolumbian whistle around his neck  and its sound was used to invoke the ancestors. According to his explanation, each object has a “destiny” and it can be fulfilled beyond its time. A clear example -said Don Carlos- “are the ancient objects present in Mayan altars. Their destiny is to be part of the altar and ritual through time.” Therefore, “the fate of an object can be: stay in an offering or precolumbian tomb, to be found by archaeologists for research, to be found by townspeople, to be exhibited in a museum or to continue their life in modern times” .

With activities like this, RUTA MAYA FOUNDATION fulfills its commitment to disclose and to value the cultural heritage of the Nation, making the collection accessible to society, while respecting the ancient and modern features that each object has inherent to its nature and origin.